14 national and international companies will carry out creative residences in the city of Tàrrega.

From April to August, the projects are presented in various rehearsals that are open to the public, to be held in Tàrrega and Lleida.

Participation, the motto of the fair this year, women, historical memory and inclusion are the main subjects of the selected projects.

FiraTàrrega presents its 2017 Programme to Support Creation, now in its seventh year. The Fair will welcome 14 national and international companies (Portugal, Chile and Uruguay), which will hold residencies in Tàrrega to prepare their stage projects, and subsequently be presented at the 37th edition of FiraTàrrega 2017, 7 to 10 September.

By means of this programme the fair has the express aim of stimulating and supporting the process of artistic creation that has a clear ingredient of research and innovation in the field of street arts and non-conventional theatre, as well as those containing elements of active participation by citizens.

Every year there will be a selection of projects and a residency plan will be agreed on that integrates the corpus of FiraTàrrega coproductions. The structure of the organization is at the service of the creators that participate in a work residency in Tàrrega to give shape and direction to their performances. The aim of internationalising FiraTàrrega means that some of these proposals are in line with the creation of stimulating transnational coproductions of street arts.

One of the distinctive features of the Creation Support Programme is precisely the aim of bringing the creation processes of the companies selected closer to the citizens of Tàrrega. The project has become a programme of activities to complement the cultural offer of the city, offering between April and September a series of open rehearsals to the public. This year we have scheduled a total of 14 open rehearsals, where companies have the opportunity to interact with the audience and create a dialogue with the human and local landscape of the city.

The 14 productions this year will be a preview of what the programming will be this 2017. These productions are a selection consisting of profiles and very different disciplines, from specialists in circus, dance and theatre to visual arts. This year's Creation Support Programme will manage projects where participation, the motto for 2017, will be the focal point and also so will the subjects of women, historical memory and inclusion.

This year four of the selected projects have a very close connection with the FiraTàrrega Master's in Street Art Creation, as is the case of Harinera (Te Ganarás el Pan con el Sudor de tu Frente) by the Chilean Andrea Paz, a show that was born from her final project in the 2015 master's. Paz reflects on the individual and collective responsibility in situations of change, how a lucrative real estate market determines the future of the region and its inhabitants.

Meanwhile, Patricia Habchy, a former student of the master's, will present The Meeting Point, a meeting between a blind man and a woman in a public space, combining dance and accordion music, which raises how to minimize difficulties and dismantle stereotypes. Can music, sounds, breathing and poetry replace or compensate for vision or audio description?

The stage group Eléctrico 28 where Alina Stockinger participates, also a former student, is working with Momentos Estelares de la Humanidad, which from the title of the book by Stefan Zweig, launches a reflection on history, power and human obsessions. In this site specific show, with reduced capacity, the stellar moments in history are small everyday moments, which will be narrated through headphones.

Ferida, a joint creation by Rui Paixão, Catarina Campos, Alba Torres, Pau Masaló and Quim Giron is a site specific project based on the joint work of Catalan and Portuguese artists from various artistic disciplines under the guidance of the Portuguese Julieta Aurora Santos, from the renowned Portuguese company Teatro do Mar and former student of the Master's in Street Art Creation. A co-production induced and shared between FiraTàrrega and Imaginarius - Festival Internacional de Rua de Santa Maria da Feira, which begins with a historical memory as a key articulator. An opportunity of artistic dialogue between two neighbouring countries that rarely speak.

aXamor by mvmproduccions is a co-production by FiraTàrrega and the Festival Internacional de Teatro Clásico de Almagro, directed by Txell Roda. A street show that acknowledges the dramatic works forgotten from Golden Age literature, and that aims to put women at the centre of the scene. A contemporary and witty counterpoint to the traditional androcentric view of the history of literature.

In a similar way to Ferida, historical memory and in this case also, women are two subjects that will be very present, such as for example Màtria (Narrar el Silenci) from the artist Carla Rovira, a theatre work that goes from private memory to collective memory. After the execution of a great uncle in 1939 by the Franco regime and the discovery of a personal letter, Carla wonders how to approach the family memory in a state forged into oblivion and the role of women and mothers mourning and silenced in this part of history.

Women also occupy a very important role in the project from the Uruguayan artist Valeria Píriz, that with Diez de Cada Diez she elaborates a participatory proposal with 10 actresses and 10 artists to focus a debate on violence against women, domestic violence and violence in its most simple expression.

As for international productions, the Creation Support Programme concludes with the Chilean dance company La Licuadora (present at FiraTàrrega 2016), which will present Lúcidos, their new work which mainly uses body movement, improvisation and sound and lighting effects. Abstract narrations with light, colour and shadow that appeal to the senses and perception.

In this sense we should also add Rehistorización Presencial by the Uruguayan Pamela Montenegro, a specific commission by FiraTàrrega that intends to take a critical look at the farm land due to the construction of the Segarra-Garrigues canal, which presents a respectful look and humanistic inspiration of the territory.

One of the purposes of FiraTàrrega is to support and bet on the creativity of young theatrical companies in Lleida. In the case of the company Íntims Produccions, after its success with Wasted, a show that is from the 2015 Creation Support Programme, jumps into the stage pool with Pool (No Water), a text by Mark Ravenhill, adapted by Iván Morales and with the direction of Marc Salicrú, Anna Serrano and Elena Martín. A visceral and powerful piece that talks about the fragility of friendship, envy, success and the meaning of art in the lives of artists.

Ferran Orobitg will present Límits, a multidisciplinary solo physical theatre that combines circus, object manipulation, movement, theatre, music and clowns. A tale inspired by the story of L'elefant encadenat by Jorge Bucay, posed as a metaphor for mental frameworks that are self-imposed and that prevent us from growing as persons.

The artists platform Kognitif, led by Arcadi Poch and the renowned and awarded street artist Andrea Michaelsson - Btoy offer Powerball, a pictorial mural work based on the technique of stencil, accompanied by parkour, movement, music and spoken word. A work in the public space in Tàrrega, vindicating culture as a vehicle for social change.

In the same way as Powerball by Kognitif, the new proposal by the company Moveo, Conseqüències, also works with the theme of hybridity, with a performance of movement that breaks the gap between the one looking and the one looked at, between the one living and the one acting. The spectator is invited to emerge from their passive status and to execute the movement, to explore three main issues. First, the opposition between reality and fiction, truth and lies and actor and spectator. Also the relationships between members of a social group, and third, the representation of the invisible through that what is most visible.

FiraTàrrega is also committed with consolidated companies that bet on risk and other disciplines, out of their usual comfort zone. This year this will be the case with Udul, by Los Galindos that, with the addition of Anna Pascual and Benet Jofré, will tackle a year of research and rediscovery of corporal abilities and individual emotional confrontation. 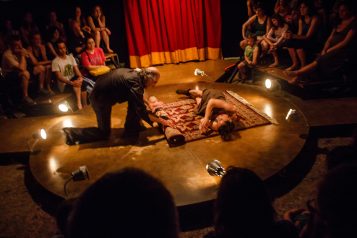 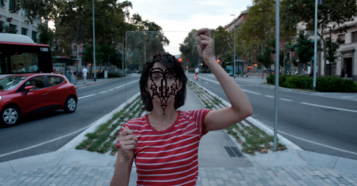 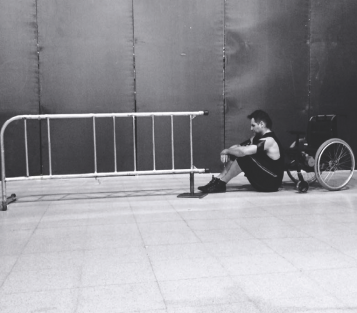