The French company Artonik will be responsible for opening this year with The Colour of Time, a show that celebrates collectively friendship, cultural exchange and interracial friendships

The 36th edition of FiraTàrrega will take place from the 8th to the 11th of September. A new edition marked by a very clear focal point: multiculturalism, a quality of street art that makes it capable of addressing very different people and contexts. This year we present the work of 57 companies from 10 countries, among which there will be 33 premiere performances.

The whole programme provides a rich line-up of formats, genres and styles; an offer for all audiences and ages, with 30 participating Catalan companies, 11 Spanish and 16 international. A total of 60 options, which will take place in various public spaces in the city of Tàrrega (47 shows) and several halls (13 assemblies).

The programme of the fair is divided into five sections: Official Section (selection of hits from the season and international premieres), Platform (performances from Program to Support the Creation and other coproduction projects), Ondara Park (projects focused on the most festive of programming), Open Programme (space for collaboration between the private sector and FiraTàrrega) and Bonus Tracks (with various proposals to complement this year's programme).

In order to make it more accessible and to target the bulk of the programming, the show once again organizes Artistic Itineraries. A total of 10 itineraries with shows for all tastes will facilitate navigating the FiraTàrrega programme.

This 2016 FiraTàrrega celebrates one of the most representative values in street arts, intercultural potential. That's why we offer a selection of productions that seek to overcome specific cultural contexts and address them to very diverse audiences. It will also feature a selection of shows under the theme of social justice and the construction of citizenship in Europe today.

In this regard, the French company Artonik will be responsible for opening this year with The Colour of Time, an ephemeral ritual that originated to erase hierarchies and differences between individuals and collectively celebrate friendship, interculturalism and interracial relations.

In the same direction, to celebrate the intercultural potential of FiraTàrrega, this edition will feature several commitments that revolve around this issue. Large format coproductions such as Manifesta, the latest creation from Obskené, a fun and festive song that celebrates difference; the premiere in Spain of Misa Fronteriza, from the Mexicans UniversiTeatro y Gorguz, a reflection on cultural hybridization; the premiere of Mulïer by Maduixa Teatre, a tribute to all the women who for centuries of oppression have fought and continue to fight for their rights; or Cafe Europa from the Italians Ondadurto Teatro, an allegory that portrays the hypocrisy and the vices of our society.

Among the most important innovations of the 2016 edition, within the Official Section, we must point out the birth of the #EspaiZebra, where the companies Baal and Les Impuxibles present two perspectives on the crossing point between sexualities. We also have the programming of #UrbanNation, a section dedicated to urban culture that has expanded to include the recent works of Montana Colors in collaboration with Tope, Iron Skulls, Get Bak, Arcopom, Quim Moya & Ravid Goldsmith and the Americans Ephrat Asherie Dance.

This year FiraTàrrega has an artistic focus dedicated to Chile, an opportunity to learn about the art scene in the country by means of proposals such as Fulgor, from Teatro Niño Proletario, who performed a creative residency in the city, within the Creation Support Programme. You can also see the staging of Frames, by La Licuadora, Viaje nº 9, by Teatro del Sonido and La cocina pública, by Teatro Container, the latter having the involvement of diverse neighbours of Tàrrega.

FiraTàrrega is a permanent dynamic structure that works all year to support the arts and artists contributing to the creation of new markets for street theatre. This year, the sixth edition of the Creation Support Programme, has welcomed the work of eleven companies in residence.

Works such as A mí no me escribió Tennesee Williams, from the company Roberto G.Alonso or Apocalypse Uploaded by LAminimAL, critically affecting the contemporary world and debuting at the fair.

Another important commitment this 2016 is the project #Mirades, commissioned to two non-European companies, CCOT (South Korea) and Carretera 45 Teatro (Mexico), who will share their particular vision turned into a stage experience concerning our understanding of the city as a meeting point.

FiraTàrrega goes far beyond the theatrical exhibition and year after year is working to become a top level professional, causing the relationship between buyers and sellers, which contributes to generating market and synergies, positioning the field of performing arts.

La Llotja, an exhibition hall of 1,100 m2, is the space where the professional meetings are held. With stands, halls, meeting places and necessary services it is the epicenter of professional relationships, as it hosts presentations and lectures. Professionals also have the Pro Club, the meeting place for evening entertainment and more informal, more relaxed conversation.

Moreover, the CASA - Circus and Street Arts Circuit project is noteworthy, in which from 5 to 11 September 10 professionals from all over Europe visit Catalonia to explore street arts and the circus, where they will see the main scenic and creation areas, as well as actively participate in the fair, to see first hand the reality of street arts and the circus in our home, with meetings with institutions and organizations present in this edition.

FiraTàrrega understands public participation as a key part in the creation the stage proposals that it presents. And it aims to bring several projects to the public so that not only can they see the result, from 8 to 11 September, but can actively participate in the process. Involving people actively, 0 minutes from the creative process, provides a different look at projects to democratize culture. Moreover, companies have the opportunity to interact with the audience and create a dialogue with the local people and landscape of the town.

To this end, this year FiraTàrrega has conducted a series of workshops, auditions, collaborations with associations, schools and actors of the city, with shows that are part of the Programme to Support the Creation. One stand out is Algo de mí, algo de ti, from the Mexicans Carretera 45 Teatro; Massager, from the Korean company CCOT or El Diván de la peluquería by Sienta la Cabeza and also others that are part of the general programme, such as the opening show The Colour of Time, from Cie. Artonik; the latest creation from the Valencians El Pont Flotant; La cocina pública from the Chileans Teatro Contáiner or #ciutatvisible from the Catalans Colordellop. 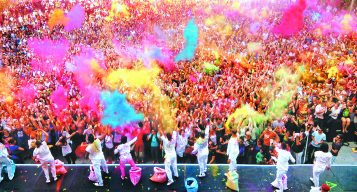 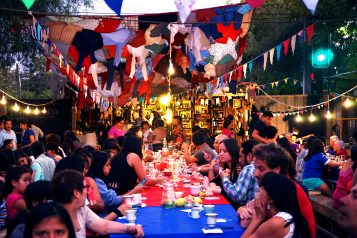 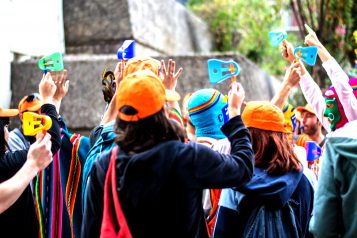