Creative artists from Poland, the Czech Republic, Slovakia and Hungary will open their shows in the Spanish state

Barcelona, 4 August 2014 · Poland, the Czech Republic, Slovakia and Hungary are four of the guest countries at FiraTàrrega's 34th Edition. Between them, they are offering 6 shows to the current program which represent the current performing arts scene in Central Europe. Each production stands out for its singularity as well as for how young their creative teams are. One of the shows (SergeantTejnorová & TheCommando) reflects on the aging process, and five older dancers take the stage to talk about life after 50; the show Edge is a co-production between the Fair's 4 guest countries; VerTeDance / JiřiHavelka / Clarinet Factory (from the Czech Republic) will present their dance show Correction; and the choreographer JaroViňarsky will present his show Animal Inside - a hybrid Slovenian production that mixes visual arts, dance and performance.

The work of the polish artists Teatr KTO and their show TheBlind is in another category.  It is inspired by the book Blindness by José Saramago and considered to be one of the most important street art theater shows on the current international circuit.

The pieces from the Central-Europe Focus

Animal inside, by JaroVinarsky (Slovakia)

Dance show presented as a series of poetic images inspired in the book of the same name by Laszlo Krasznahorkai and Max Neumann. A piece for two dancers who, starting from the animality inherent in the human being, it delves into the extreme states of the relation of a man home with his own body, with another man and the audience. An exercise in understanding power in the relations between people and the domestication of the human desire to stand out from the multitude.

Close Encounters of the Different Kind, by StereoAkt (Hungary)

A group of aliens from different galaxies and human in appearance have arrived to take control of the Earth. In establishing their new home they face different challenges, like that of communicating with the humans. A new work by this Hungarian company, directed by Martin Boross, in co-production with FiraTàrrega, is a site specific piece that deals with distance, unpredictability, safety and familiarity and that involves a group of local immigrants. A show of gestural and visual theatre that includes live music, dance and videoart.

A Czech contemporary dance company that won the Dance Piece of the Year 2014 in their homeland with this piece. A choreography that speaks about freedom and the lack of it, reclusion, predetermination and our power to take decisions, to become passionate about and believe in something.

A multidisciplinary production that combines movement, video, text and music. A young creative team from the contemporary Czechoslovak scene work with actors from five European countries with ages ranging from 52 to 83, to offer a show that talks about age and the experience of these artists on their life journey, but that also talks about their desires, emotions and desire to live. Edge is a production that tackles taboo subjects related to aging, changes in sexuality, the perception of one's own life or loneliness to transmit an optimistic message to us: neither life nor art finish at 50.

A dance piece with very playful undertones that pursues the participation of the audience. Presented as a live videogame, the spectators direct a narrative sequence of the events involving four dancers and a musician. A dialogue that works on interaction in a creative process. A street staging that reflects on the construction and reception of a contemporary choreographic piece.

Large-format adaptation for the street of José Saramago's novel Blindness by this renowned-internationally Polish company. A multidisciplinary show with a great visual impact and high physical intensity that makes up a parabola about the decay of civilisation and a shocking study of the human condition. A show, in the most literal sense of the word, which will give you a unique experience and a collection of unforgettable emotions. 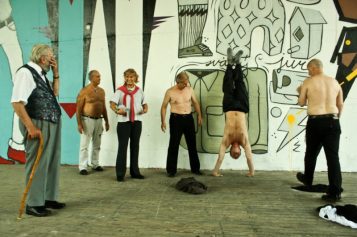 Edge, by Sergeant Tejnorová and The Commando